By llewellyncox
Cognition, Behavior, Consciousness and other Human Essentials, Health and Medicine, Psychology and Spirituality, Society, Law and Policy, Technology and Artificial Intelligence
Leave a comment

Image from: The Maury Show

The young gentleman on the Maury Show is looking uncomfortable. He shuffles uncomfortably in his seat as the genial Maury Povich reads aloud the results of his recent polygraph test to the audience in the studio, who dutifully greet each new result with a hearty chorus of boos.

You told the Lie Detector that you did not sleep with Tiffany’s best friend, Candace.

The Lie Detector determined that was a lie.

More booing. Tiffany, a heavy-set young woman sitting in the next seat along, jumps to her feet and screams a continual stream of expletives at the young man that lasts for at least a minute. The censorious *bleep* edit will be working overtime on this episode. An immense bodyguard effortlessly holds her back as she flails madly around him with her fists, trying to make contact with the young man’s face. Eventually, she gives up and storms off the stage, a mobile camera crew hot in pursuit as she flees backstage to the Green Room.

The ability to differentiate the truth from lies has been the most basic challenge for law-keepers since the very beginning of society. If a criminal is able to deceive their way out of trouble, then not only does the original ill-deed go without justice, but all society is at risk as the offender lives out their destructive life with a sense of impunity.

For most of history, the focus of an interrogator was to force a suspect or witness into telling the truth. Naturally, this led to the use of many and various forms of torture which, apart from being inhumanely barbarous, have the unfortunate effect of making people confess to crimes that they are completely innocent of. As the rise of industrial civilization led to the creation of professional police forces in urban cities, more formalized and effective methods of questioning were developed that would allow the police to catch a suspect in a lie by challenging their account with logic and evidence. However, a skillful criminal who adequately covered their tracks could still often escape justice, especially in the days before modern forensic science.

The rapid development of neuroscience during the early 20th Century led to the idea that a machine might be created that would be able to distinguish whether a subject was telling the truth or not. In 1921, John Augustus Larson, who was oddly both a medical student and police officer in Berkeley, California, invented the modern polygraph test. Larson reasoned that the mental creation and maintenance of a lie was more stressful than simply telling the truth. Therefore, by monitoring several key physiological aspects including blood pressure, pulse, and skin conductivity, an examiner might be able to spot a subject in the act of a lie. A telltale increase in sweating and heart rate would indicate an increase in the subject’s stress level as they struggled to mentally process the tangled fiction of the lie that they were concocting.

Larson’s invention caught on, and in the 90 years since, polygraphs have assisted in the processing of many thousands of criminal cases, high-security clearance tests, and episodes of The Maury Show. 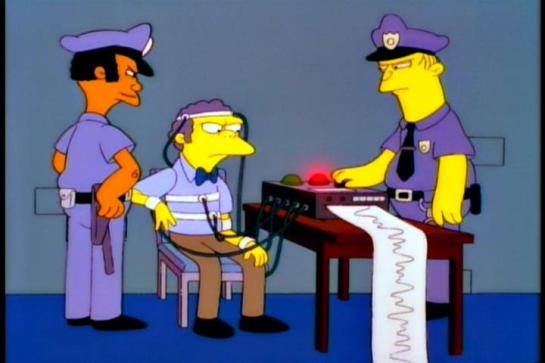 There is one problem with the polygraph test — it doesn’t actually work. Despite decades of use in the field, the machine’s effectiveness cannot be scientifically substantiated, and it is not widely considered allowable in courts as evidence. The National Academies of Sciences found in 2003 that the majority of polygraph research that had been done to date was “unreliable, unscientific and biased”. It is well known that there are established techniques to cheat the test — as the polygraph essentially measures physiological stress as a corollary for lying, a skilled liar can easily pass the test by maintaining calm and focus.

If polygraphs are so unreliable, then why are they still used? Although they are not a reliable scientific method to establish for sure whether or not a subject is being truthful, polygraphs are still very useful as an investigative tool. Among the best-established interrogative methods for outing a liar is to unsettle the subject, to mislead them into thinking that the interrogator knows a truth that will ultimately uncover their lie anyway. The theater of the polygraph can have a powerful effect on the weak-minded — like a voodoo curse, it only works if the recipient thinks it does. A focused, relaxed subject may be able to beat the test, but its very use is often enough to induce the unsuspecting into confessing the truth.

The development of functional magnetic resonance imaging (fMRI) allows scientists to look into the biochemical environment inside the brain, and determine which areas become more or less active during a given task. Recalling an artificial memory or creating a fictional story will cause increased activity in slightly different areas of the brain than recalling a true memory, as they require distinct mental processes. Conducting an interview with a subject inside a fMRI scanner might then be a more reliable means of establishing whether they are being truthful or not.

Of course, fMRI machines are huge, power-hungry, million-dollar pieces of equipment that require extensive shielding to prevent their massive electromagnets from frying any nearby electronics, so it’s unlikely that we would see them deployed to every urban police department any time soon. There is also the consideration over how and when it would be appropriate to use such an invasive tool in an investigative setting — looking directly into the brain activity of a person without their consent or very good reason indeed might be considered overly intrusive by many a court of law.

Is it possible that some inventor will create a micro-fMRI scanner that could be portable and energy efficient? There is no fundamental scientific problem that would prevent such a device, once considerations such as power consumption and magnet strength could be overcome at smaller scales. Perhaps it might also be possible to better interpret electrical signals around the brain (such as an EEG) to extrapolate a model of the brain’s internal functioning. Would these be reasonable investigative tools, or an intrusive violation of a suspect’s basic civil rights? Should the inner workings of the human mind, the final sanctuary of our individuality, be off-limits to investigators?

Any test that requires human interpretation can be biased. No matter how high-tech the test’s technical underpinnings, as long as a human being is responsible for determining the outcome, then it will always have a flawed quality of individual judgement built-in. If a more advanced lie detector test in the future is ever to be considered reliable, it will need to operate and analyze its data autonomously. To be considered accurate and reliable, it would also need to be extensively validated by experts other than the police or prosecutors it will serve.

Ultimately, even with the best of tools and a free hand to use them, we will only ever be able to find out if a subject thinks they are telling a true and accurate account of what occurred. Human memory is far from accurate, and so by itself is still an unreliable witness to the truth, regardless of how expert we grow able to harvest it from the minds of others.

The Center for Compassion and Altruism Research and Education

Musings on Memory and Aging